My Bavarian great-grandparents’ hometown was Pfaffenhofen an der Ilm, just north of Munich. Only my great-grandmother, Maria Echerer Bergmeister, was born in the town and her family had lived there for centuries. My great-grandfather, Joseph Bergmeister, was born nearby and went there to work for his uncle. Pfaffenhofen was the site of the couple’s wedding in 1897 and the birth of their first child a year later, a daughter. He left home in 1900 to immigrate to America, and mother and daughter joined him there in 1902. Did they ever miss their hometown? What was Pfaffenhofen like?

Pfaffenhofen an der Ilm is located in the Hallertau region of Bavaria, which is the largest hop producing area in the world. The region is in Oberbayern, or Upper Bavaria, and it has a long history. The area was likely first settled by monks from the Benedictine monastery in Ilmmünster in the 8th Century. Their estate was called Pfaffenhöfe or Priests’ station and was located north of the current town. Four centuries later, Duke Ludwig I, called Ludwig the Kelheimer, founded the market town of Pfaffenhofen where the Ilm and Gerolsbach rivers meet. The town was mentioned by name as early as 1140, and by 1197 it was called a “market town”. By 1318, Pfaffenhofen was referred to as a fortified settlement. 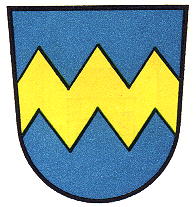 From 1387-1389, the Städtekrieg, a war between Swabian towns and Bavarian dukes, was fought throughout Southern Germany. Pfaffenhofen became one of the war’s victims when it was nearly completely destroyed by fire in 1388. When the town was reconstructed, it was surrounded by a circular wall with four gates and 17 towers. The Pfänderturm is one of the original 17 towers and the only one still standing today. By 1438, Pfaffenhofen officially received recognition as a “town”.

[This is an engraving of Pfaffenhofen by Anton W. Ertl in 1687. The town’s wall, two of the gates, and many of the towers are clearly visible.]

Another war left a significant mark on the town. In 1632, soldiers fighting in the Thirty Years’ War were billeted to houses in town. One of the soldiers had the plague and the disease quickly spread. Of the 1,800 inhabitants, only 700 survived the outbreak. It would take Pfaffenhofen another 200 years to reach the same population.

Population growth was never a problem after that time. The town continued to attract residents. While the population was about 4,000 at the beginning of the 20th Century, it is now closer to 23,000.

The town square, or hauptplatz, has existed on roughly the same site since the town was founded centuries ago. The square has many unique and beautiful buildings. Standing majestically at one end of the square is the town’s church, St. Johannes Baptist. The church was built in 1393 in the Gothic style to replace the Romanesque style church destroyed by the 1388 fire. After The Thirty Years’ War, the interior was renovated in the Baroque style. The steeple, about 253 feet high, was first built in 1531. Destroyed by a lightening strike in June, 1768, it was immediately rebuilt. Most important for descendents of Pfaffenhofen’s Catholic residents is the existence of parish baptismal, marriage, and death records dating back to 1597. 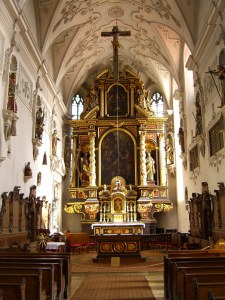 You will also see evidence of the former worker’s guilds inside the parish church. Each guild had some church obligations as a part of the guild’s rules. Once a year each guilds celebrated their own special Mass, with special times for each guild. For example, the brewers’ Mass was celebrated on Monday after New Year’s while the tailors’ was on the Monday after Easter week.

Because of the guilds close association with the church, when the church was remodeled in 1671, the artist Johann Bellandt of Wessobrunn carved a number of apostle statues honoring the guilds: Mathew for the butchers, Phillip for the bakers, John for the brewers, Bartholomew for the leather artisans, Jacob for the weavers, and Simon for the tailors.

Because I do not read German very well, information about famous residents of Pfaffenhofen an der Ilm is difficult to find. Two individuals seem to have made a difference in the town and are worth a mention here. When I first visited Pfaffenhofen, I was surprised to see a street named after Joseph Bergmeister. They named a street after my great-grandfather? No, but they named a street after someone with the same name – his first cousin. Cousin Joseph was born on 11 August 1874, a year and a half after my great-grandfather. Unlike his older cousin, Joseph never left Pfaffenhofen. He became instrumental in introducing electricity to the town in the early 1900s. In recognition for his work, he received a medal from the town in 1934 and an honorary doctorate from the Technical College of Aachen. He died on 31 October 1950. I’m not sure when a street was named in his honor, but you can drive down Dr-Bergmeister-Strasse today! (The first name Joseph is still valued in the Bergmeister family today – you will find Joseph Bergmeisters on both sides of the ocean who are related, whether they know it or not, as 3rd and 4th cousins. In my own family there are five generations of Joseph Bergmeister’s so far.)

Another more famous Joseph from Pfaffenhofen is the poet Joseph Maria Lutz (1893-1972). He was born in Pfaffenhofen, gained recognition as a poet, and today there is a museum in his honor in town. He is also known for adding a verse to the Bavarian anthem in 1946. As there is no longer a king of Bavaria, Lutz wrote a new verse to replace the stanza about the king.

One of Joseph Maria Lutz’s poems is entitled “Hometown.” Written in 1965, the poem shares his feelings about Pfaffenhofen. The following translation was provided by Mr. Robert Wilkinson:

The houses line themselves cuddle cozily after a fashion,

The church spire points to heaven on high,

And the people are loudly singing to the chiming tower bells.

And country lanes stream in from adjacent forest and field

To become streets of prominence in both name and importance,

And in Time’s own passage finally come to stillness.

The bemused places of childhood are rekindled yet again with laughter,

And even the old fountains cascade in a trance of stillness,

as the swirling eddies made rush, silently

like life’s Insignificant Other, just as only Love can know.

And somehow even the Wind takes on a life,

Blowing in gust after gust, through the years,

And through the days, back to childhood’s Home,

As in fairy tale nights and imagined lands.

From the squares and tedious narrow alleys echo the familiar sounds,

the rolling wagon wheels, the clip-clop of stout mares,

the staccato of the blacksmith’s hammer,

or as in years of yore, the rolling barrels and the rooster’s crow.

And all that appears Close once again, is yet so Far,

And Life itself avoiding yet the grave;

song of Greeting or Return.

You, my little Town,

even if I have forgotten much,

I behold you precious still,

I, forever at Home in you.

I had the opportunity to visit my ancestors’ hometown in 1998 and 2006. I’m sure my great-grandparents would be amazed at some of the changes that have taken place. But, in many ways, they would find a lot of things the same. The apartment they lived in before coming to the US is still there, and it probably looks much the same. They might be surprised by all of the cars though! 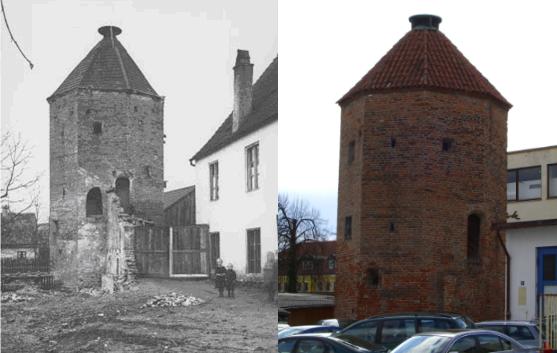 Sources for this article:

[This post was written for the 47th Edition of the Carnival of Genealogy: A Place Called Home.]

11 thoughts on “A Bavarian Hometown”