As I pondered over this topic for the Carnival of Genealogy and mused about the election in the next few days, I couldn’t help but wonder how my immigrant ancestors felt about the American electoral process.  Did they vote?  What was the voting process like in their homelands?  The records don’t exist to tell me the answers to the first question, but I was able to uncover some interesting facts about the electoral process in the countries from which they came.

My German great-grandparents never voted in a U.S. election because my great-grandfather was not naturalized.  But, he may have had the chance to vote in Germany.  Joseph Bergmeister was born in 1873, only two years after the unification of Germany as a nation.  Prior to that, German states were independent of one another, and my ancestors came from the Kingdom of Bavaria.  In the new, unified Germany, called the German Empire, the country was ruled by a Kaiser or Emperor.  The Kaiser was not an elected position!  But, men were able to vote for the Reichstag or the Imperial Assembly, which was a weak representative body.  (Note: women did not get the right to vote in Germany until 1918.)

The environment from which my great-grandfather came was a semi-constitutional monarchy, but at least the men had some say in the government.  From 1888 through to its abolishment with World War I in 1918, the argument over the best form of government continued.

I was unable to determine the voting age during this time.  If it was 18 or 20 years old, then my great-grandfather would have been eligible to vote in the 9th election of 1893.  Elections followed every five years, so his last vote – and perhaps his first if the voting age was 21, was in the election of 1898 since he left for the U.S. in 1900.  I can only imagine what he thought about the more democratic process in his new country in which men had the right to vote for the leader of the country!  As I said, he never got the chance to vote in America because he did not become a citizen.

For my Polish ancestors, their homeland’s political process was even more muddled because the country of Poland did not officially exist during my great-grandparents’ lives.  My remaining three great-grandfathers, Ludwig Pater, Jan Piontkowski, and Jozef Zawodny, all came from the area of Poland that was “confiscated” or partitioned by the Russian Empire.  It was the largest country in the world in the early 19th Century.

Similar to the German Empire, the Russian Empire was led by the Tsar, or Emperor.  Prior to 1906, the tsar’s power was unlimited.  After 1906, the tsar’s power was more limited although the country was far from having a constitutional government.  Under the Tsar, the legislative power was called the Imperial Assembly of 196 members.  Half were appointed by the Tsar, and half were elected by the men of the Empire.  (Note: women received the right to vote in Russia and Poland in 1918.)  It appears that six members were elected by Poland of the 96 elected members.

Russia’s lower body of government was called the Duma of the Empire or the Imperial Duma, consisting of 442 members.  Reading about the Duma was more confusing than when I first learned about the U.S. electoral college in grade school!  The Duma appeared to have more members allowed for the wealthier classes, and less allowed for the working class or peasants.  But it does appear that even the peasants had a vote in this system, much to my surprise.  The effect of that vote was likely minimal, but the large population of the Polish cities of Warsaw and Lodz meant that Poland was represented to some extent.

Again, it would be interesting to know what my Polish great-grandfathers thought of the electoral process in the United States.  They were each naturalized in 1923, 1925, and 1926.  One, Jan Piontkowski, could have voted in the 35th Presidential election, while the other two were eligible to vote in the next election in 1928.  I don’t know if any of them did vote, but my mother remembers her one grandfather talking about Franklin D. Roosevelt and he likely voted for him.  Each of their wives would have been eligible to vote as well since women in the U.S. could vote as of 1920, and they became citizens through marriage to their naturalized husbands. 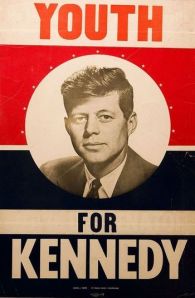 My father was first eligible to vote in the 1956 election; although my mother is not much younger, because of when her birthday fell she would not be able to vote until the 1960 election (for President, that is).  Both were big supporters of John F. Kennedy.  Growing up, Kennedy reigned large in our house even though he had been dead for years before I was born.  My mother would never feel the same level of support for any other candidate!  The democratic nature of  my family would change as the party’s values began to change in the 1970s.  I dislike having only two main parties from which to choose, and I prefer the “Independent” label since neither party meets my personal values completely.

I received something my parents did not: the right to vote at the age of 18.  I was just shy of 18 in time for the 1984 election, so my first chance was in 1988.  Since I did not feel strongly about either candidate or politics in general, I neither registered nor voted.  While it is embarrassing to admit, I finally registered this year.  I suddenly felt guilty for squandering an opportunity that so many of my ancestors never had.  Next week, I will proudly vote for a U.S. President for the first time in my life.  I hope my ancestors are proud that I finally will take part in the process!

[Written for the 59th Edition of the Carnival of Genealogy: Politics and Our Ancestors.]

3 thoughts on “Politics Then and Now”