Soon that jolly, white-haired man dressed in red will visit your house at night and deliver some treats to the children that have been good.  In fact, the night he comes is tonight!  Wait, did you think I meant Santa Claus?  No, it’s time for the visit from St. Nicholas! 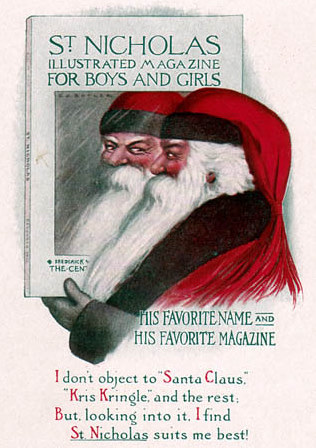 St. Nicholas lived during the 4th Century in a Greek territory that today is Turkey.  Many legends exist about his life.  Most agree that he came from a wealthy family.  After becoming orphaned, Nicholas used his wealth to help the poor and needy.  He devoted his life to God and became a bishop in the Church.  He continued to perform acts of charity, usually in secret, and he was known throughout the region for his goodness.  In giving gifts, he asked that the recipients do the same to those in need.  By the time Bishop Nicholas died, he was known as a miracle-worker, gift-giver, and a true man of God who cared about others.

It became customary around the world to celebrate the feast of St. Nicholas, December 6th, by doing what he had done.  On the evening of December 5th, gifts would be left in secret to those in need, presumably left by the saint himself.  He would wander throughout the country and leave gifts for children.  In fact, some children would leave food for St. Nicholas’ means of travel, a donkey.

Many countries continue the celebration of St. Nicholas Day. In Germany, the area of Bavaria where my great-grandparents came from celebrated the arrival of Sankt Nikolaus. He would arrive in his bishop’s regalia with a miter and crozier and ask the children if they had been good.  Families cleaned the house and children cleaned their rooms in anticipation of his arrival!  Boots were left out, and the kindly saint would leave a gift to those who were good – or coal to those who were not.

In Poland, St. Nicholas was called Sw. Mikołaj. He also visited dressed as a bishop and an angel to help him with his sleigh full of goodies, which were usually sweets such as cookies or fruit.  He also encouraged children to be on their best behavior.  He sometimes returned on Christmas Eve with gifts the children requested in letters.

I laughed when I learned that Italy celebrates San Nicola by recalling the time they stole his earthly remains in the 11th Century and brought them to Italy.  It’s not like it sounds though, for they had a good reason!  (Though relic stealing was quite popular back then…)  The celebration of his “arrival” to Bari is celebrated in May, but he also visits children with goodies on the evening of December 5th.

Many countries have similar celebrations and traditions of the saint’s arrival.  So, what happened to him?  Did he “become” Santa Claus?  Or did Santa “replace” the bishop-saint?  In America, the blame gets distributed on the usual suspects: the Puritans, the advertising industry, and the media.  One could argue that he slowly evolved into Santa.  I don’t have anything against Santa – in fact, he’s been quite good to me over the years!  But in reading about St. Nicholas and the traditions that our ancestors celebrated made me wish he had the same PR man as Mr. Claus.  What parent wouldn’t admire a guy who gets children to clean their rooms and be good?  Sure, Santa wants you to be good, too, but St. Nicholas was more about helping those in need and sharing what we have with others.  Over the years the religious aspects of the man and the events surrounding the gift-giving seemed to have disappeared as well.  But, we can always revive the St. Nicholas tradition in our own families by spreading the news and telling the stories about him.  Nick’s stories are even more fascinating than Santa’s stories!

For more information on Saint Nicholas, his history, the evolution of Santa Claus, and how St. Nicholas Day is celebrated throughout the world, visit the wonderful site called The Saint Nicholas Center – discovering the truth about Santa Claus.  In fact, just as I noted in my recent article about the photographic reconstruction of another Nicholas, they have reconstructed what he probably looked like — familiar-looking, isn’t he?