Once upon a time, growing up in Philadelphia, I enjoyed playing in the snow.

Sledding, circa 1977. The hill became the parking garage for Frankford Hospital.

Then, I grew up.  As a grown-up, snow became rather unpleasant for two reasons.  First, I had to shovel it.  Since being cold and physical exertion don’t fall anywhere on my top 100 list of desirable things to do, you can only imagine how much I enjoy that activity.  Second, I had to drive to work in it. To educate all of the snow-lovers out there that think I’m a wimp because of that statement, the street I lived on in Philadelphia never saw a snow plow until I was in my 30’s.  Places north of us that routinely get twelve feet of snow have efficient procedures in place for its removal.  My city did not.  The main roads are plowed and salted, of course, but the “secondary” roads were not.  My parents’ street must have been a “tertiary” street, because it was left behind even when the city got around to the secondary streets (I am happy to say this has since been corrected since the late 1990’s).  As a result, once a significant snowfall occurred, our street would become a sheet of ice.  My past experience navigating a vehicle in these conditions would qualify me to drive a zamboni®.  To drive to snowless roads, one had a choice between going around a curve and up a hill, going down a steep, icy hill, or maneuvering a bit out of the way on icy but flat streets.  The latter route became my favorite – and at times I considered parking my car on the clean street and walking the 3-4 blocks to my house.

After extreme-shoveling and driving on ice, snow lost any appeal it may have once had in my youth.  Even though Philadelphia does not usually get much snow during winter, we have had our incidents.  The most famous of all was the Blizzard of 1996 which took place from January 6-8.  Although the blizzard hit most of the East Coast, Philadelphia had the distinction of receiving more snow than anywhere else.  The offical snowfall total was 30.7 inches, and of that, 27.6 inches fell in a 24-hour period – a new record.

My parents' backyard after the Blizzard of '96. Compare to the Winter 1976-77 photos above - it is the same fence.

With that much snow, the city had difficulty plowing even the main roads – there was no hope for neighborhood streets.  There was simply nowhere to put all of the snow, so they dumped it into the Schuylkill and Delaware rivers, which later caused flooding problems.  The main concern for my family was how to eventually drive off of the street.  In fact, my mother and I were scheduled to go to Florida the following week – the only time we’ve ever traveled anywhere together.  We were convinced we’d still be snowed in by then.  But, fortunately, a miraculous pick-up truck with a plow attached came down our street.  We still had to shovel about five feet of the street to get to that lane, but it was better than all of it!

Besides the occasional 2-3 feet of snow, even more spectacular was the Ice Storms that occurred frequently during the winter of 1993-94.  At this time (as well as the Blizzard of ’96), I had a 22-mile commute to work down I-95, a road that can be deadly even on sunny and dry days thanks to Philadelphia drivers (and this was before everyone had a cell phone stuck to their face).  Pretty?  Yes!  Fun?  You’ve got to be kidding.

As for winter sports, I skied.  Once.  The best part about it was coming in from the cold to a warm place and having something hot to drink.  It’s just not for me, probably because my body is colder than average and it is just uncomfortable to be below sixty degrees.

This is the story of my discontent of winter.  Why do I live in Philadelphia?  I ask myself that question often.  It’s home.  It may not be forever, but for now it’s home.  The “fun” part of winter got left behind with my childhood, never to return.  Well, maybe it will return some day…if I get to spend winter somewhere warm.  The photo below was taken in December, and I was  finally content during winter! 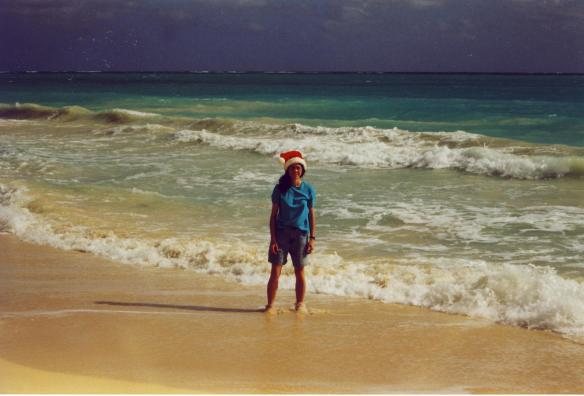 [Written for the 64th Edition of the Carnival of Genealogy: A Winter Photo Essay.]

Essay title is a play on Shakespeare’s famous line from Richard III, “Now is the winter of our discontent made glorious summer by this son of York” (also used as a novel title by John Steinbeck.)

3 thoughts on “The Discontent of My Winter”