Genealogists know that finding the “married names” for women is can be difficult.  Is it possible to research women without knowing who they married?  In the case of my great-grandmother’s sisters, the answer was surprisingly “Yes!”  This story is also interesting because it involves photographs – some that began the investigation, and some that proved the facts much later.  In this three-part series of posts, I’ll introduce my great-grandmother and her sisters.  This post, Part 1, shows what they looked like and offers the few bare facts I had to begin my research some twenty years ago.  Part 2 will present the facts I uncovered through genealogical records (and some tips to remember for your own research).  Part 3 will “prove” some of those facts in an unusual twist of fate involving more photographs.

It all began with a photograph.  Four photographs, to be precise.  My family did not possess many photos of our ancestors, but my grandmother did have several that were precious to me.  She gave me the four photos – three of which I will show here and one I’ll save for post #2.  The first showed her mother, my great-grandmother, on a visit to her four sisters.  My great-grandmother, Wacława Slesinska Zawodny (in Polish, the feminine form of her married last name would be Zawodna), lived in Philadelphia, PA.  Her four sisters, the Slesinski sisters, all lived in McKeesport, PA, which is located in Allegheny county near Pittsburgh, PA.  My grandmother said her mother once traveled across Pennsylvania to be reunited with her sisters.

The back of the photo reads: "The Hollywood Review" - the Slesinski Sisters.

Writing on the back of "The Hollywood Review" photo shown above.

My mother knew that the woman in the middle of the back row is Wacława, who went by the name of Laura in the U.S.  Fortunately, someone had also written everyone’s name on the back of the photo.  Because it lists Laura as “Grandmother Laura”, the unknown identifier is likely my grandmother (or one of her sisters).  The back of the photo, which is undated, had “The Hollywood Review” written in ink, presumably by one of the sisters, sent to my great-grandmother to commemorate her visit to McKeesport.  The names are written in pencil in a different handwriting.  The only incorrect label is “Great Aunt” applied to Josephine – perhaps it was meant to show respect to the fact that she and Laura are older than their sisters, but the truth is that evidence would later show all five women to be sisters.

In addition to this photo, my grandmother had one of the sisters without the child Irene in what appeared to be the same photo session – that photo will illustrate my second post on the research into the sisters’ lives.

The third photo offered a close-up of my great-grandmother and one sister.  The back of the photo is labeled, in the same pencil-handwriting as the group photo above, “Grandmother Laura and Aunt Josephine”.  I love two things about it – the close-up view of their faces, and the fact that it identifies who they are!  The photo was originally full length, but it was cut in half.  While the background appears to be the same house as the above photos, their dress is different.  Was it taken on a different visit, or just on a different day of the same visit?  Although they both look rather austere, I was amazed by the resemblance between my great-grandmother and my grandmother (her daughter).

Finally, the fourth photograph shows Laura and one of her sisters.  Based on the label to the above photo, it seems to be Mary with what appears to be her family.  Luckily, it was also labeled with a clue as to their identities.  Their dress is the same as the above photo. 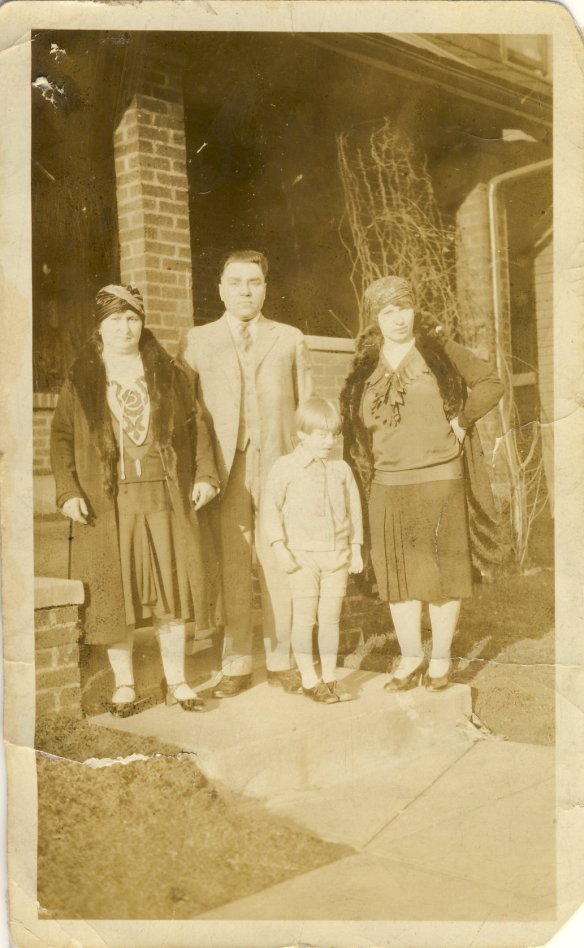 Back of "The Majewski Family" photo

The handwriting is the same as the above photos – can I assume that “Mr. Adolph Majewski” is Mary Slesinski’s husband and the boy is their son?  Is the address the house where all of these photos were taken?  When were the photos taken?

These four photographs contained the only information that I knew about my great-grandmother’s sisters.  My grandmother could not remember any of her aunts married names.  All I knew came from the photos:

Just knowing these bare facts, could I find out more about my great-grandmother’s sisters?

1 thought on “The Slesinski Sisters: Part 1 – The Photographs”