The theme to this month’s Festival of Postcards is “quadrupeds”.  Once again I have managed to find a unique example that meets the theme and also has a connection to my family history.  Here’s a great card that shows a couple of quadrupeds all decked out to celebrate the dog days of summer! 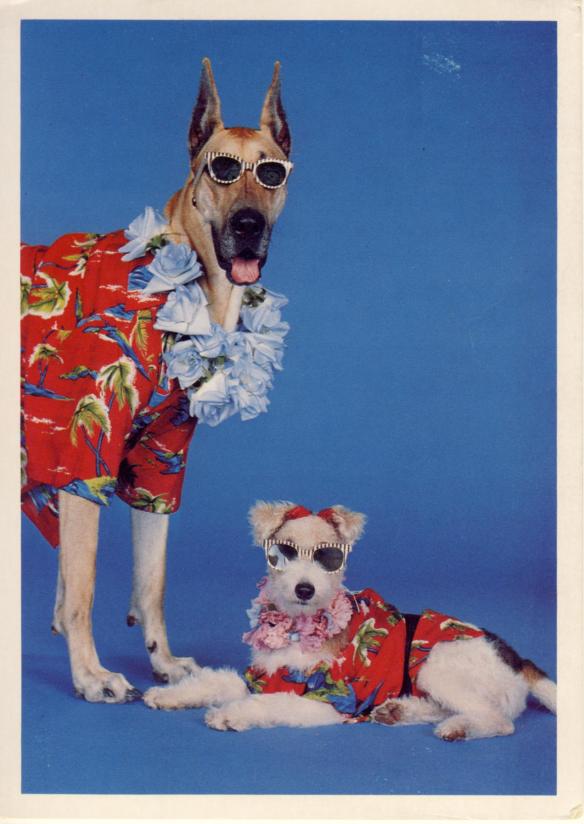 The text of the postcard reads:

Dear Donna, As you can see from the picture, we’re not the only brother-sister team that can party Hawaiian-style!  Even if the other sisters are cool – they’re not as nice (and kind & intelligent & loving) as you!  Thanks for the CCD material – it really came in handy.  You’re in my thoughts and prayers.  I love you, Drew

As if you could not figure it out, the postcard is from my brother to me.  But the postmark didn’t quite make the card itself, and I couldn’t remember exactly when he sent it to me.  To determine the date of the card, I used the investigative techniques I’ve learned from my genealogical work as well as skills I’ve learned from others about how to date photographs and postcards.  I focused on three distinct areas to estimate the “age” of the card – clues provided by the sender/recipient, the writing or message content, the card itself, and the postage.

First, the sender and recipient – my brother and me.  There were two different times in our lives that my brother sent me letters and postcards because he was living away from home.  The first was a five-year period in the early 1980’s when he was in the United States Marine Corps.  The second was about a five-year period beginning in the late 1980’s when he was serving in a very different type of “corps” – two different seminaries.

Next, I looked at the subject of the text.  At first glance, I assumed the card was sent while he was in the seminary for two reasons – he’s rather, uh, nice and complimentary.  I’m not saying he was rude when he was a Marine, but I remember the seminarian as a kindler, gentler brother!  Also, he mentions me sending CCD material.  CCD stands for “Confraternity of Christian Doctrine” which is a Catholic religious education program for students attending public schools.  On the one hand, I figured my seminarian brother would have more of a need for CCD material than the Marine brother.  But, I was teaching CCD classes during the time my brother was in the Marines.

The next clue came from the postcard itself with a copyright of 1984.  In 1984, my brother was in the USMC and I was teaching CCD classes, so this clearly tipped the scale in favor of that time period.

Finally, the card has a 20-cent stamp.  I looked at The History of Postage Rates in the United States.  This site shows a 20-cent postcard rate beginning in 1995.  By then, my brother was married and not sending me mail, so this was not possible.  I know that when I send a postcard, I sometimes use a “regular” stamp if I don’t have time to go to the post office for a postcard stamp.  Looking at the normal postage rates, the 20-cent stamp was in use from November 1, 1981 to February 17, 1985.

Conclusion: The postcard has a copyright of 1984, the stamp was in issue from then until 1985 (the denomination, anyway – I could have done further research on the design of the stamp itself), I was teaching CCD during that same time period and my brother was in the USMC during that same period, therefore, the postcard was likely sent during 1984.

Even though this was a “recent” postcard and sent directly to me, I gave this example of trying to determine its date not only because I myself didn’t remember, but because it is a good example of how to proceed with following a postcard’s clues to estimate the time period in which it was sent.

More importantly, once again in finding an entry to meet the “challenge” of the Festival, I am reminded of what postcards are all about…keeping in touch with family and friends.  I was in high school when my brother was in the Marines, and it was always a special treat to get a postcard or a letter from him.  I didn’t save all of them, but I did save a few that were special.  I am sure this one made my “save” pile not only because of his loving message, but because of the humor of the card.  In fact, I think he had a Hawaiian shirt just like that one they have on!  I was about to enter my Hawaiian shirt & shades stage (I haven’t left it yet, by the way), so it was particularly fun to receive this one.

[Submitted for the 5th Festival of Postcards: Quadrupeds]

3 thoughts on “Remembering the Dog Days of Summer”