We’re fools whether we dance or not, so we might as well dance. ~Japanese Proverb

It all started at a dance. The day was Sunday, March 13, 1955. The place was the gymnasium at St. Boniface Church in Philadelphia. The event was insignificant to most of the world, but highly significant to my life – it was the night my parents met for the first time.

My mother, Anita, loved to dance. She briefly took dance lessons as a child and loved tap and ballet, but her parents could not afford the classes. Instead, she settled for neighborhood dances, mostly held in church and school gyms. Each dance “specialized” in a particular age group from pre-teen to older teens, to almost-adult and beyond. My mother and her girlfriends practiced dancing on the sidewalk in front of their houses, and an older woman who lived nearby showed them some steps.

On the evening in question, my mother was 19 years old. She had “outgrown” the fun dances at St. Matt’s, so she and some girlfriends decided to try the Sunday night dance at St. Boniface. It was her first and only visit there.

My father, Jim, also frequented neighborhood dances in his teen years, and St. Boniface was close to where he lived at the time. The boys danced as a way to meet girls, and they learned by watching others dance. He was 20 years old, lived with his parents, and made $1 per hour hanging garage doors for a company two doors away from his home.

Neither remembers what music was played that night, but a live band performed. When Jim asked Anita to dance, he remembers being glad he had his “little black book” and a pen with him. He asked for her phone number; she gave it to him.

Their first official date was to see a movie (neither can remember which one). Afterward, they went to the Mayfair Diner. During their meal, Jim proclaimed that he really wanted to get married. Surprised that a young guy would want marriage, my mother asked why. “Well,” he said, “it sure would be nice to have someone cook dinner and iron my shirts.” My mother replied, “You don’t need a wife, you need a maid.”

When Jim asked Anita out again, she wasn’t sure if she wanted to go. She didn’t know what to say, so she did what nearly everyone has done at some point to avoid rejecting a date – she lied. She pretended she was too sick to go out. That night, he sent her two dozen roses as a get well wish, which made her feel even more guilty about lying. They did go out again, and again, and they were married a little more than one year later on April 7, 1956.

It all began at a dance, and dancing stayed a part of their lives in some way or another. When they were a young married couple, they occasionally went to the nightclubs in Philadelphia and southern New Jersey. But besides social dancing, dance became a bigger part of their lives in another way – show business!

In 1973, my brother began high school and the school had a parents’ association that put on shows as a fundraiser. My parents became involved with the shows. The mothers would perform various types of chorus line numbers from jazz to tap. Once, they even performed a number on roller skates! My father’s comedic dance routines have already been mentioned in other posts, but he also became an accomplished serious dancer as well and appeared in some jazz and tap numbers.

The choreographer for these shows, Miss Kay, was a dance teacher and ballroom dancer. She had a tremendous talent for teaching dance, and my mother marveled about how she took a bunch of mothers aged from mid-30s through 50s who knew little about dancing and was able to create entertaining numbers in which they all looked like stars.

My mother was so impressed with Miss Kay’s teaching abilities that I suddenly was enrolled in a tap dance class with other girls my age (around 7-8). Either I was not talented, or not interested, or Miss Kay finally met her match…I quit after a few classes. Oddly enough, I returned to Miss Kay’s classroom with my mother – about twenty years later! At this time, Miss Kay wasn’t just my parents’ friend, she had become my brother’s mother-in-law. The second time around I did learn a few things about tap dancing, but I’ll never be Ann Miller!

My mother’s love of dance was passed on to me, but for me it was a love of watching dancing, especially Gene Kelly movies. But I long to dance… I once  had great fun taking a swing dance class, and I’d love to learn ballroom dancing. The real dancer in the family is my niece, the granddaughter of both my mother and Miss Kay. She has their talent (and her mother’s dancing talent), and is so good that she could easily make a career of it if she wishes.

My parents weren’t pros, but they loved dancing for the fun of it.  And if they hadn’t enjoyed dancing so much, they might have never met! May their dance continue for many more years! 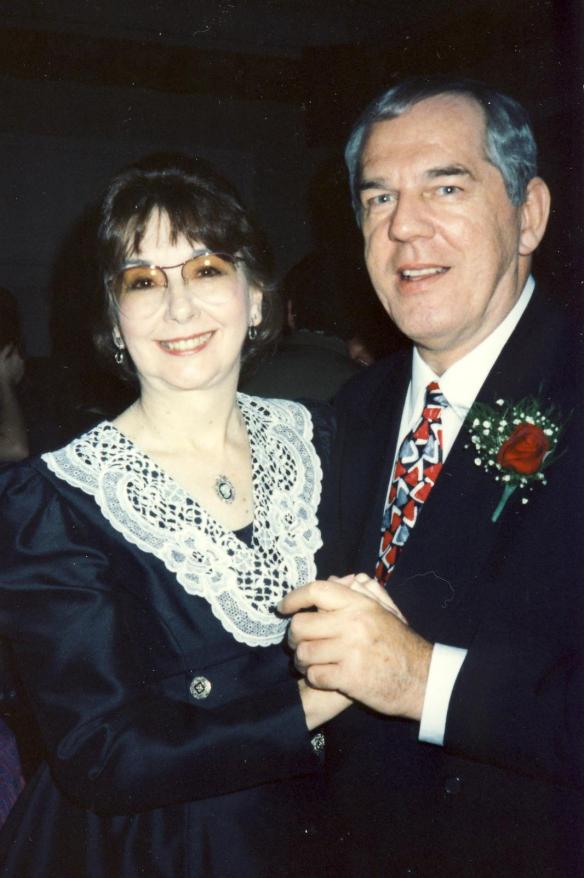 [Submitted for the 92nd Carnival of Genealogy: Dance!]

9 thoughts on “It All Started at a Dance”