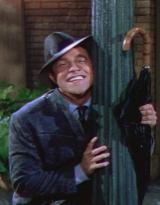 This month’s COG (for which I am late…the dog ate my homework, Teacher Jasia!) asked us to Research From Scratch by starting a search on someone else’s family tree.   When I began my own family research about 21 years ago, there were not any records available on the internet.  Lately I’ve wondered how much I could have found if I had waited until today to begin my search and how much easier it would have been.  This challenge was an opportunity to find out. The subject of my experiment: actor-singer-dancer-director Gene Kelly.  As most visitors to this site have since surmised, Gene Kelly is what I call my “other gene hobby.”  Gene was well known for his smiling “Irish eyes”, but I was curious about his Canadian and German ancestry as well.  Starting from scratch, how much could I find in a few hours?  In that short amount of time, I learned a lot about his ancestry.  But I also learned some research lessons that I’d like to share.

Start by interviewing your family, but don’t believe everything they say as fact.

When I began my own research, I started by asking my parents questions about their parents and grandparents, and I also referred to an interview with my grandmother when I was in grade school and needed to complete a family history project.  That same advice holds true today – you need basic facts about a family to begin your research.  In the case of my subject, I couldn’t actually talk to Mr. Kelly.  So instead I turned to the only biography that was written during his lifetime in which the author interviewed Kelly himself.

The book is Gene Kelly by Clive Hirschhorn (Chicago : H. Regnery, 1975).  While it is not entirely accurate – especially since it begins with the incorrect birth date of its subject – it was a way to get basic information about his brothers and sisters, parents, and grandparents – as close as I can get to acquring the info from Gene himself.

From the first chapter of the biography, I learned enough basic facts to begin my research on the Kelly family:

In addition to Gene’s parents’ info were the basics about their children.  In birth order, the Kelly family included Harriet, James, Eugene Curran, Louise, and Frederic.  Gene was born on August 23, 1912.  This is plenty of information to begin a search.  But, don’t believe everything you read or everything your family members tell you – sometimes the “facts” can be wrong, and only research will find the truth!

Census records are a great place to begin your research.

Back in 1989, my research began at the National Archives with the U.S. Federal Census records.  Of course, back then the first available census was from 1910, and none of the records were digitized.  Today, I still think census records are the best place to start researching a family.   I used Ancestry.com and began with the 1930 census.  Despite many “James Kelly” families in Pittsburgh, PA, it was relatively easy to find the entire Kelly clan.  As I continued backward with earlier census records and Harriet Kelly’s Curran family, I found some similarities to issues I had in my own family research:

In the few hours of research on census records alone, I was able to trace Gene’s father only to 1910 after his marriage to Harriet.  In 1900 he was single, and I was unable to find a recent Canadian immigrant named James Kelly.  Gene’s maternal line ran dry with the Curran’s in 1880.  William Curran and Mary Elizabeth “Eckhart” married after 1870.  There are too many William Curran’s from Ireland to determine the correct one, and I was unable to locate the Eckhart family prior to 1880.

The signature of Gene Kelly’s father from his “declaration of intention” petition in 1913.

Ancestry.com also provided James Kelly’s naturalization record.  In addition to confirming his birth in Peterborough, Ontario, Canada in 1875 (also found in Ancestry’s World War 1 Draft records), the petition lists his immigration information and the birthdates of the first 4 Kelly children (youngest son Fred was not born at the time of his father’s naturalization).  Unfortunately the record does not list the birthplace of Harriet other than as Pennsylvania.  Was it in Houtzdale, PA, where her parents resided in 1880 or elsewhere?

Although Ancestry has Canadian census records, I was unable to definitely find James Kelly in Ontario on the 1881 or 1891 census.

The internet helps you find a lot of information, but not everything is online.

Census records can only get you so far before you need vital records.  While many states also have these records online, Gene Kelly’s ancestors settled in the same state as mine, Pennsylvania, which is not one of the “friendlier” states when it comes to accessing vital records.  If I were to continue with the Kelly research, vital records would have to be obtained offline.  It would be useful to obtain the marriage record for William Curran and Mary Elizabeth Eckhart, which may have occurred in Clearfield County since that was their residence in 1880.  Finding this record would reveal both sets of parents’ names and possibly birth information for William and Mary Elizabeth.  For the Kelly side of the family, I would likely attempt to obtain James Kelly’s birth record in Peterborough.

[Side note: I have met several of Kelly’s relatives.  One cousin has delved deeper into the Peterborough roots of the Kelly family as well as James Kelly’s maternal line, the Barry family.  There is an interesting newspaper article on a house that may have belonged to the Canadian Kelly’s called One Little House Leads to Many Connections.]

I was able to confirm many of the intial facts I started with, but I didn’t learn any essential information in addition to those facts.  Specifically, I hoped to learn more about Gene’s maternal grandmother’s German roots, but I was unable to find out anything more about the Eckhart – Eckerd family using Ancestry.com alone.  More offline research is learn more about this branch of the family.  I did learn more about Gene’s aunts and uncles – this is important because researching collateral lines can lead to important information about shared direct ancestors.  Finally, I learned that it is much easier to start from scratch now than it was 21 years ago.  Even though the record sources I used were the same, digitization and the internet has made it much faster to find information!  And easier, which is great because it will hopefully prompt more people to start from scratch!  What are you waiting for?  Start researching your family!

[Submitted (late) for the 97th Carnival of Genealogy: Research from Scratch]