The theme for Week 15 of the 2015 edition of the “52 Ancestors in 52 Weeks” challenge is “How Do You Spell That?” and my ancestor is my grandfather, James Pointkouski. There really could be no other choice for that theme – my grandfather is the inventor of our family name…and we have to spell it often.

How Do You Spell That?

I almost felt sorry for the telemarketers calling my parents when I was young. I’d answer the phone and hear, “Hi, can I speak to Mr….uh, Mr. Po-, er, ah, Mr. P-p-pint, er, Mr. Portkonski?” I’d pause for dramatic effect, then respond, “No, I’m sorry, there is no one here by that name.”

But worse than the telemarketers was the need to spell my name, all the time. Even my parents talked about changing the surname for a while, and I think they may have done it if it hadn’t cost money to do so. We considered my mother’s maiden name, Pater, because it seemed a lot easier (even though it is also 100% Polish in origin). For a  while, the surname “Perry” was in contention just because we liked it. But then my father called in a pizza order and the clerk asked, “What’s the name?” My Dad grinned and responded, “Perry!” But then the clerk asked, “How do you spell that?” Undefeated, and still smirking, my Dad replied, “Any way you want…”

By now you might wonder why we feel no allegiance to our name or no pride in our birthright. Well, it’s simple…it’s not our name. My grandfather made it up. If he had made up a name that was easier to spell and pronounce, I’d thank him for it. As I delved into the family history and gained pride in my Polish heritage, I was disappointed I couldn’t have the “real” name that he changed slightly (to little improvement). Unfortunately, the non-legal change was made just prior to all of the rules, records, and federal regulations of today and now I am, quite simply, one of only eight people on earth born a Pointkouski. We’re proud to be “Points” even if we do have to spell it a lot.

From left to right: James at age 13, age approximately 24, and age 47 with wife Margaret

James’ parents were Jan Piątkowski and Rozalia Kizeweter (featured in Week #3). Jan was a leather worker and the family lived in Warsaw, Poland. Jan was born in Warsaw, and Rozalia’s family moved there from just outside the city when she was a girl. They had a son, Józef, born in November, 1903, and a daughter, Janina, born in December, 1905. Shortly after Janina’s birth the family decided to leave one big city for another. Jan immigrated to Philadelphia in March, 1906 with his sister’s husband, Ludwik Czarkowski. Rozalia and the children followed in November of the same year. In America, their first names were anglicized to John, Rose, Joseph, and Jean.  But the last name changed slightly, too. In English, the Polish letter “ą” does not exist. The letter has the phonetic sound like “on” so Piątkowski became Piontkowski in English.

That should be the end of the story of the surname, so to speak, and my grandfather, father, my brother and me should all bear THAT name. But the name change game wasn’t over yet…my grandfather wasn’t born yet!

My grandfather, James, was the surprise baby born in Philadelphia on July 6, 1910. His father was 39 years old and his mother was 44 – typical ages today but highly unusual in 1910. On his official Pennsylvania birth certificate, the name is listed as GANUS KINCOSKI.  I assume “Ganus” is what became of “James” when spoken with a heavy Polish accent. Kincoski was apparently an alias that my great-grandfather used, temporarily, attempting to hide from either law enforcement or those to whom he owed money. Other than around 1910, John always used Piontkowski, his correct surname, on legal records.

By the time James, or Jimmy as he was called, reached adulthood, he tweaked his own surname further. As early as 1933, James changed a few letters in the name Piontkowski and – voila! – the surname Pointkouski was unofficially and unceremoniously born.

James’ older brother, Joe, also changed his name (also not legally). I always thought Joe had more sense, though, for the name he chose was a lot easier to spell: Perk.  Ironically, not that long ago I got to speak to one of Joe’s daughters who grew up with the name Perk. She complained of being teased in school and being called “Percolator” – and she yelled back at her bully, saying, “Well my real name is Pointkouski!”

My grandfather may have tried the “Perk” name on for size for a while – he refers to himself as “Perk” in a letter to my grandmother in 1933, and a photograph of my father in 1936 is labeled on the back as “Jimmy Perk”.  But, on all legal documents my grandfather used “Pointkouski”.

James grew up wanting to be an architect, but he left school at a young age to go to work to help support his parents. He became a truck driver – and remained one for his entire life. As a truck driver he delivered ice cream to soda fountains and other shops, which is where he met his wife, Margaret Bergmeister, whose brother Max owned the store. (See a photo of James and his delivery truck here.)

James and Margaret got married in January, 1934. Later that year they had a son, James, and eight years later welcomed a daughter, Jean.

James’ sister left Philadelphia in the late 1920’s to get married, and apparently he did not see her again after that. His mother, Rose, died in 1937, and his father, John, died in 1942. James had a good relationship with his brother, Joe, who was also a truck driver. Unfortunately Joe Perk died in 1953 at the young age of 49. 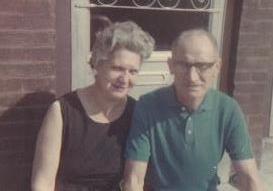 I remember my grandfather from my childhood but I didn’t get to see him very often. As the only granddaughter among five grandchildren, I do remember once when I was around six years old he insisted that I must have a ring or other jewelry because I was a girl and “Girls need pretty things to wear!”

I wish I knew him better, and longer, because before I could ever think to ask him why our name is spelled the way it is spelled, he passed away. James died on February 13, 1980, at the age of 69.

In what I refer to as “The Final Misspelling” – or “The Final Insult” – his name was spelled incorrectly on his tombstone: 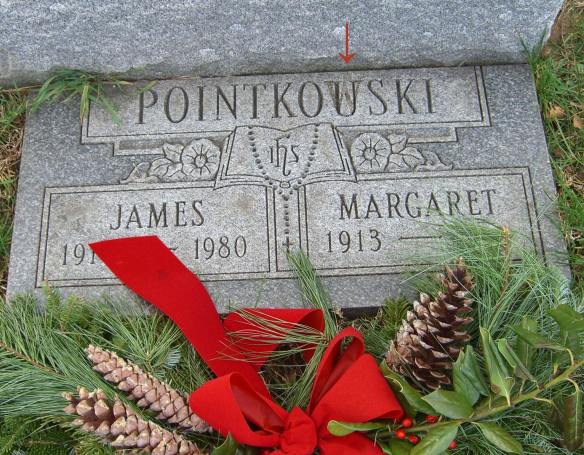 The final name misspelling for James: they accidentally carved a “W” into his tombstone and “corrected” it to a “U”. A larger, correctly spelled stone is also in place.

Gradually, despite wishing I got to use my real Polish name Piątkowski (as a female, my name in Poland would be Piątkowska), this English major has embraced the permanent misspelling and is proud to be a Pointkouski. Even if you can’t spell it.