At the entrance to Greenmount Cemetery in Philadelphia

Earlier this month I visited Greenmount Cemetery in Philadelphia.  I was hoping to find a tombstone for a couple that is connected, though likely not related, to my family – Carl and Sophia Mach.  I have been researching this couple for an upcoming post, so I thought a visit to their grave would be appropriate to “end” the story, so to speak.  While there, I wanted to re-visit the grave shared by my great-grandfather, Louis Pater, and his father, Joseph Pater, even though their grave is not marked with a stone.

Greenmount Cemetery is located at 4301 N. Front Street in Philadelphia (phone 215-329-4747).  I hoped to find out more about the history of the cemetery, but so far I have not been able to discover much information.  I was surprised by the sheer size of the cemetery – approximately 75 acres.  There are thousands of graves, and it is still being used today as a “active” burial ground.

The cemetery was opened around 1875.  Much like the neighborhood it resides in, the ethnicity of the cemetery “residents” has changed over the years.  Some of the oldest graves from the early 1900’s have German names as well as Irish and Polish.  The newer graves have many other nationalities including those with ancestry from various Asian and Latin American countries.

I was pleasantly surprised that the office was not only open and staffed, but eager to assist me.  A gentleman looked up my family names in a card catalog and checked to see if there were others with the surname besides those I mentioned.  This was fortunate, because I had forgotten that in addition to my great and 2nd great-grandfather, my great-grandmother was also buried here with her son.  If the staff member had not asked me if she was a relative, I would have missed the opportunity to visit her grave, which held an even bigger surprise – a tombstone!  This was surprising for two reasons – first, not many of my relatives have tombstones, which is why I don’t show any photographs of them on this site.  But I was more surprised because I thought I remembered visiting this cemetery before in the early 1990s, shortly after beginning my genealogical research.  And if I am correct in that memory, I distinctly remember that there was no tombstone – which means I either just thought I visited this particular cemetery or I somehow didn’t find the right grave when I did! 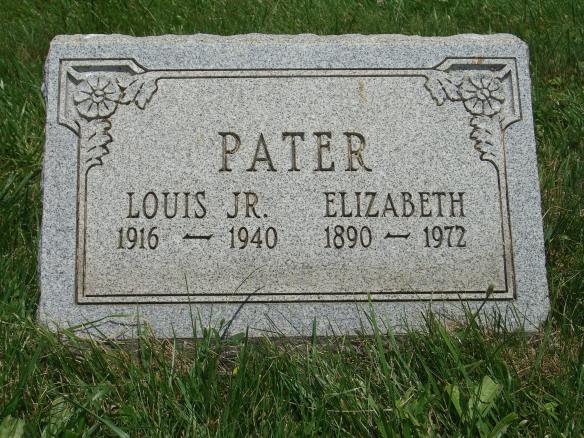 One of the few tombstones in my family: my great-grandmother, Elizabeth Miller Pater, and her son Louis

Another reason that the card information was helpful is that, in the case of Mr. and Mrs. Mach, their grave contained two other individuals that did not have tombstones.  I was able to surmise the relationship of these individuals to the Mach’s because of my earlier research.

Besides looking up the family information, I was provided with detailed maps of the sections that held the requested graves and directions on how to find the sites.  Not all cemetery offices are this friendly to researchers, so this was a delight – especially since I was short on time for the visit.  The cemetery is so large that graves would be next to impossible to find without a map.

Although there is little historical information about this cemetery on the internet (or an official site for the cemetery itself), some of the internment records are available on microfilm from both the Historical Society of Pennsylvania and Family Search.  The FHC film rolls are:

The cemetery is also listed on Find a Grave with more photos and information about some graves of famous professional baseball players who are buried there.

Greenmount Cemetery is so large, you forget you are in the middle of a busy section of Philadelphia.

The topic for the premier edition of the Graveyard Rabbits Carnival is “exceptional finds” – share those rare and unique cemeteries, gravestones, monuments, memorials, and inscriptions.

I am one of those genealogists that likes to explore old cemeteries even while I am on vacation.  When I visited Paris, France in 2007,  Père Lachaise Cemetery (Cimetière du Père-Lachaise) was on the list of sights to see along with the Louvre, Eiffel Tower, and Notre Dame.  I would consider it an exceptional find for several reasons.  First, you will see many graves that are 200 years old – for Europe, where grave recycling is the norm, so it was refreshing to see “old” graves.  Many think it is exceptional because of its size – 118 acres – or because so many famous celebrities are buried there.  What was more fascinating  to me were the larger number of non-celebrities, everyday folks like you and me, that are laid to rest beside the rich and famous – truly a reminder that we are all equal in death.  As I walked around the cemetery, I was also struck by its universality.  Although it is a Parisian cemetery, its occupants’ names spanned the globe.  In addition to French surnames, I saw American, Polish, German, and many other nationalities.

Here’s a look at some of the unique gravestones and monuments I photographed (click on thumbnail to see a larger view):

For more information about Père Lachaise, visit the following sites:

[Written for the 1st Edition of The Graveyard Rabbits Carnival: Exceptional Finds.]