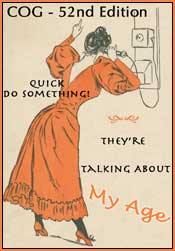 “Life would be infinitely happier if we could only be born at the age of eighty and gradually approach eighteen.” ~ Mark Twain

The 52nd edition of the Carnival of Genealogy focuses on the topic of “age”:
Take some time to look over the data that you have collected on members of your family tree, and share a story of age with us … With the understanding that “age is often a state of mind”, share your family story about someone whose story stands out because of their age, either young or old.

I am one of those people that will read an obituary for any centenarian.  I am amazed by their lives, simply because of their sheer length and how much they saw the world change during that time.  Some graduated from high school and college before my parents were born, and many spent my entire lifetime as a widow or widower.  Their lives fascinate me, and I really wish I was related to one of these long-living people because it would make a great story.  My friend’s grandmother lived to 101!  But, as you will see in my musings on age, none of my ancestors have made it that long (yet).  I have no ancestors who climbed Mt. Everest or graduated from Harvard at advanced ages, nor do we have any child prodigies either…yet.  But, hopefully I’ve found just a few fascinating “age” facts among my seemingly boring ancestors that make them “stand out” in the crowd.

Who Lived the Longest?

My Ancestor Who Lived the Longest is my grandmother, Margaret Bergmeister Pointkouski.  She died at the age of 84 years 9 months, beating my other grandmother by six years.  My grandfathers died young by comparison at 69 and 60 years old.  I do not have all of the exact dates for my entire family tree, but I was surprised to discover that of all those “greats”, none lived as long as Margaret (even though some came close).

Margaret’s older sister, Marie, wins the distinction of being my Collateral Relative Who Lived the Longest.  She died in 1990 a few weeks past her 92nd birthday.  She will not hold the title for much longer though, because my Oldest Living Collateral Relative is “Aunt Dot”, my other grandmother’s younger sister, who is currently 92 years, 6 months, and counting!

While these older relatives all lived in the 20th Century, I was surprised to discover that some of the ancestors further back in my family tree actually lived much longer than some of my other “modern” ancestors.  For example, my grandmother Margaret far outlived her own parents.  Her father Joseph Bergmeister died at the age of 54, and her mother Marie Echerer was only 43.  Yet each of her parents had ancestors who survived to what I thought were very old ages for the times.  Even though her father Joseph lived longer than his own father by more than ten years, his great-grandparents lived to the ages of 77 and 75 in the mid-1800s.  His wife Marie’s great-grandfather also lived to 77 around the same time.

My research has shown that marriage customs vary from country to country.  In Bavaria, the groom was usually in his mid-to-late 30s – or even his early 40s – while the bride was usually in her 20s.  I think this was mostly due to the long period of training for craftsmen to become a full member of a guild, which would then give them the economic capability to support a family.  In fact, the guild required that a newly professed member become married shortly after being accepted into the guild or they were disqualified.  Many young women died in childbirth, so the widower would seek to marry another young woman – in some cases, this further increased the age discrepancy.  If the woman was strong and survived many pregnancies, sometimes the men would die in their 50s or 60s – leaving a widow with many small mouths to feed.  Further research will tell me if these ages were common only to craftsmen – my assumption is that farmers married much younger than their 30s!

In Poland, the marriage custom was very different.  My research has shown that most couples married when they were in their early 20s, or even at 18 or 19.  The Ancestor Who Married at the Youngest Age is my Polish great-grandfather, Louis Pater, who married his almost 19-year-old bride the day after his 17th birthday (here in the U.S.).

Your Mamma was So Old…

While the media might make you believe that “older” mothers, meaning women over 40, are “new” to the modern age, this isn’t quite true.  My “Oldest Mother” Ancestor is my great-grandmother, Rozalia Kizoweter Piontkowska, who delivered my grandfather in 1910 just weeks before her 44th birthday!

But I have some even crazier mammas in my family tree… Jakob Bergmeister married Anna Daniel in 1835 when they were 30 and 23 – young by Bavarian marriage standards.  They proceeded to have 15 children in 19 years – Anna was 24 at the birth of her first child and 43 at the birth of her last!  Infant mortality was very high though – at least 7 died as infants.  Of the rest, the fate of 5 are not certain, but 3 others lived to adulthood.  As for the parents, Jakob died at the age of 65 in 1870.  Anna died one year later at the age of 58 (probably from exhaustion!).

Maybe Jakob was trying to model his prolific marriage on that of his own parents, Joseph Bergmeister and Kreszens Zinsmeister.  When they married in 1800, Joseph was 37 and Kreszens was considerably younger at 23.  They started having children right away.  In the end, they had 12 children in 16 years, with Kreszens 23 years old for the first and 39 for the last.  Of these children, I can not yet account for the fate of 8, but there are 2 confirmed infant deaths and at least 2 who lived to enjoy adulthood.

Age is Mostly a State of Mind

I don’t know much else about her other than “vital statistic” dates and a few other facts, but based on numbers alone I’d have to award my 3rd great-grandmother, Franciszka Wojciechowska Pluta, the Most Amazing Feat for an Older Woman award.  At the “young” age of 69, she boarded a passenger ship to travel from Poland to the United States, alone.  According to the passenger arrival record, she was 4’10” and limping, but she made the journey!  She spent those last years in the U.S. living with her daughter’s family, and she died at the age of 73 in 1914.

So there you have it – just a few “facts of age” from Donna’s family tree.  While I don’t have any centenarians, you really can’t say “never” when it comes to genealogy.  Who knows what I’ll discover next as I record and transcribe dates?  And who knows how long the current generation will live?  We might just have a centenarian in the family yet!

[Written for the 52nd edition of the Carnival of Genealogy: Age]