The second edition of the Smile for the Camera carnival focuses on Belles & Beaus: Choose a photograph of an ancestor, relative, yourself, or an orphan photograph that shows a memorable wedding, courting/dating, or a photograph depicting young/old love.

I’ve shown a few photos of belles and beaus here, including my parents’ wedding photo and a “mystery” photo that may or may not show my great-grandfather as the Best Man at his cousin’s wedding in Germany. But I’ve selected this special photo to best represent the topic:

This photo depicts the wedding of Jane Zawodna and Sigmund Galecki in 1926 (make that 1925 thanks to the new Philadelphia Marriage License records that are now online). The wedding ceremony was likely at St. Adalbert’s Church in Philadelphia, and the photographer was probably in the Port Richmond neighborhood where they (and the church) resided. The “Maid of Honor” is my grandmother, Mae (or Marianna) Zawodna, Jane’s sister (if you recognize her, another photo of her from the same event was featured here). I do not know the identity of the “Best Man”, but I hope to learn more later this summer as I attempt to contact my cousins, the descendants of Jane and Sigmund (called “Ziggy”).

[This post was written for the 2nd edition of Smile for the Camera, a Carnival of Images.]

This photo of my great-grandfather, Joseph Zawodny, is one of two that I am fortunate enough to own. It’s a nice portrait, though slightly damaged – the top of his head missing was not the fault of my talent (or lack thereof) at cropping photos. But what intrigues me the most is what I don’t know – what’s the lapel pin or medal he’s wearing? I’ve tried to enlarge it, but the original photo is not high quality and attempts at enlarging just the pin haven’t made that area any clearer as you can see below. So now I’m calling on all armchair photograph detectives for help – can you solve the mystery?

Here are some facts for background information:

Place of Photograph: taken at “J. Peel” studios in Philadelphia. The photographer had two locations listed, but based on where the Zawodny family lived it was probably taken at the studio at 3060 Richmond Street.

Joseph was born in 1879 in Poland in a small town near Dobrosołowo, Konin. He married Waclawa Ślesinska on 28 January 1902 and left Poland two months later, arriving in New York in April, 1902. His wife would follow in 1903, and they settled in Philadelphia to raise a family. Although he was rumored to have served in the military (whether it be the German, Prussian, Russian, or Polish army), I have not found evidence of this in the marriage record. He was only 23 years old when he left Poland. However, could this be a military insignia from one of those armies? He did not serve in the US military, at least not that I have found so far. Another legend puts him in the Merchant Marines, but my grandmother was a good story-teller and enjoyed flash over fact so I’ve put little faith in that one. 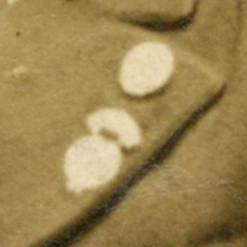 Could the medal be related to some sort of Polish fraternal society?

Joseph was active in his parish, St. Adalbert’s in Philadelphia. He also had an insurance policy with the PRCUA, the Polish Roman Catholic Union of America. He became a naturalized US citizen in 1927 and died in 1944.

If anyone has any ideas on the mystery insignia, please leave a comment!

© 2008 - 2022
All rights reserved
Blog by Donna Pointkouski
Title by William Shakespeare
Whereof what's past is prologue, what to come
In yours and my discharge.
The Tempest Act II, Scene 1