Today it was announced that actress Betsy Blair died on March 13 at the age of 85.  Unless you are a fan of classic film and/or Gene Kelly in particular, you might not recognize her name.  Her obituaries seem to highlight two main facts about her life: she was the first wife of Gene Kelly, and as an actress her most memorable role was her  Oscar-nominated performance in 1955’s Marty with Ernest Borgnine.  For me, the news of her death was more than just a headline because I had the opportunity to meet her on three different occasions.

In late 2001, I was contacted by Gene and Betsy’s daughter, Kerry, concerning a benefit showing of Singin’ in the Rain.  My Gene Kelly web site, The Gene Scene (1994 – 2012), was about seven years old and had a large enough following to be of use in promoting the event.  I asked Kerry a rather bold question: “I’m traveling to London in a few months…would your mother meet with me?”  I knew Betsy resided in London with her second husband, filmmaker Karl Reisz.  To my surprise, I received her phone number and the instruction to call her when I arrived.  I did, and I was further surprised with an invitation to her home for tea.  I wanted to meet her, but I didn’t expect such graciousness to a stranger. 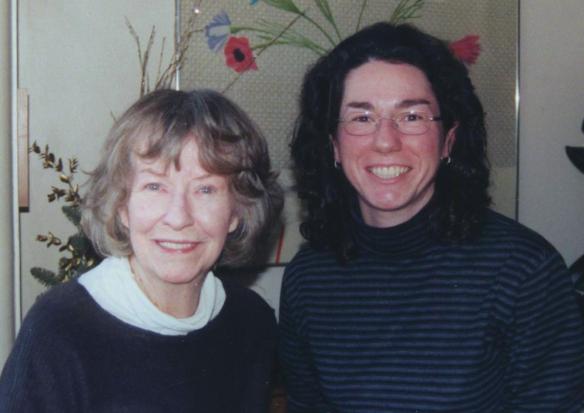 Betsy Blair was always described in magazines or biographies as the plain “girl next door”.  When she invited me into her home, she became the “grandma next door” and immediately made me feel welcome.  As we chatted, I was a bit starstruck – here was a woman who, at the age of 18, was married to one of Hollywood’s hottest emerging stars and was the friend and hostess to many of the biggest film stars of the 1940’s and ’50’s.  Did it seem surreal to you, I asked, to have Judy Garland, Phil Silvers, and Lena Horne sitting around your living room on a Saturday night? She smiled and paused, as if thinking of how to describe it.  She finally shrugged and said, “It was all so normal – at the time, it was so new – I didn’t realize there was anything unusual about it!”

Betsy had the unique ability to immediately make me feel as if we had been friends for years.  She became as interested in my life as I was in hers.  I didn’t ask questions as if I was interviewing her; we merely conversed.  She understood that I admired the man who had once not only been a Hollywood star, but also the love of her life, and it was almost as if our mutual (if different) love for Gene bonded us together for that brief time.  We talked about many things over the course of an hour, including the old studio system for making movies, her current work, movies today, Gene’s widow, Stanley Donen, and Gene’s reputation as a perfectionist.  She told me that while filming On the Town, Frank Sinatra didn’t really want to rehearse the dancing, so he’d joke and fool around.  Gene and Stanley would pretend the cameras were rolling so they’d get some practice time in!

A few months after my trip, I was delighted to have the opportunity to meet her once again – this time with her daughter in Ann Arbor, Michigan for the benefit showing of Singin’ in the Rain.  At a dinner before the showing, it was Betsy who sought me out and rushed across a crowded room to say hello as if I was an old friend.  More of her “down to earth” personality emerged throughout the evening as she shared a smoke with fans outside the theater and answered questions from two young Gene fans.  One rather young fan excitedly asked a rather personal question, “What was it like to kiss Gene Kelly?”  She smiled in my direction and gave a rather eloquent answer to the child: “When you love someone, it’s very special to kiss them – no matter who they are.  Gene and I were married and in love, so it was very special.”

In 2003, Betsy published her memoirs, The Memory of All That.  She told me about it during my first visit with her – including that the title was not her first choice.  Her favorite title was Lucky in Love but since the book wasn’t only about her love life, the editors “didn’t like it”.  She said, “I’m not sure who’s really going to want to read it anyway – there’s no scandal in it!”   I met her again at a book signing in New York City, and again it was like a family reunion.

Betsy’s modesty is apparent even in her name – she wasn’t Liz, a flashy star’s name, but plain and simple Betsy.  She was born Elizabeth Boger in Cliffside, NJ.  After taking dancing lessons for years, she went to New York City at the age of 16 to get a job as a dancer.  She met Kelly when she auditioned for a show at Billy Rose’s Diamond Horseshoe.  There she mistook him, the show’s choreographer, for the busboy; he hired her anyway.  Gene was, at the age of 28, twelve years older than Betsy.  She appreciated his sophistication, and he became smitten.  Over the next two years, Gene advanced from choreographer to Broadway star to a Hollywood contract, and their relationship also grew.  The couple married literally on their way to Hollywood.  In 1942, their first and only child was born, Kerry.

In the late 1940’s, Betsy appeared in some films.  But her most famous “role”, at least according to news reports, seems to be the accusation that she was a communist.  It almost lost her the role in Marty, and she became blacklisted moreso for her support of others who were blacklisted rather than any involvement in communist activities herself.  Gene and Betsy divorced in 1957, but she never had anything bad to say about him afterwards (nor did he about her).  She later married Karel Reisz and continued to work in films in Europe.

This weekend, newspapers and film sites will remember Betsy Blair as Gene’s wife, Karel’s wife, Ernest’s co-star (despite other film appearances, that was her most lauded role), and more.  What you may not read about is her unassuming and gracious nature, her intelligence, and her wit.  I wish I could have known her better, or longer, but I am grateful that my life was able to brush hers briefly.  Good-bye, Betsy – I’ll miss you!  Requiescat in pace.

5 thoughts on “I Remember Betsy”