Two views of St. John the Baptist Church in Pfaffenhofen an der Ilm - from 1875 on the left and 1998 on the right.

My family’s history in the town of Pfaffenhofen an der Ilm, Oberbayern, Bavaria, Germany, goes back several hundred years.  While that’s a long way back with regard to genealogical research, the town itself is much older than my family’s history recorded in its church registers.  Pfaffenhofen was officially recorded as a town in 1438, but earlier chronicles mention the town as far back as 1140.  The town’s population expanded significantly over the years, but it also decreased due to events such as plagues and wars.  If I could go back in time to visit the town, at least one thing would look the same – the town’s Roman Catholic parish church, St. John the Baptist (Stadtpfarrkirche St. Johannes Baptist), has always resided at one end of the town square.

St. John the Baptist Church was originally built in a Romanesque style, but the church – and much of the town – was destroyed in a fire in 1388.  In 1393, the church was rebuilt in a Gothic style.  In 1670-72, the interior of the church was renovated into the Baroque style we see today throughout most of Bavaria.  The steeple was struck by lightning in 1768 and rebuilt the same year.

I’ve documented my Pfaffenhofen ancestors back to the 1670s due to the church records of St. John the Baptist.  The Echerer (Eggerer), Höck, Nigg, and Paur families worshiped at this church for generations.  My great-grandparents, Joseph Bergmeister and Maria Echerer, were married here in 1897 and baptized their first child, Maria Bergmeister, there in 1898.  One hundred years later, I became the first descendent to re-visit the church. 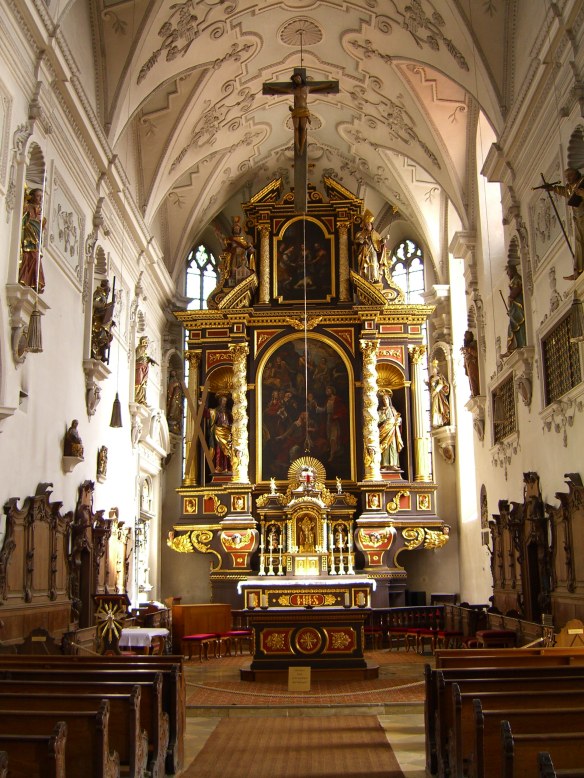 The interior of St. John the Baptist is very ornate with many paintings and statues, which is typical of the Baroque style and also typical of Bavarian Catholic churches.  Some might call Baroque churches ostentatious, but the style is meant to be dramatic in order to have an emotional effect.  What was emotional for me, however, was knowing that my ancestors worshiped in that very place so many years ago.

Since my Pfaffenhofen ancestors were craftsmen – primarily shoemakers, masons, and carpenters – I liked seeing evidence of the trade guild’s in the church’s interior. Each guild had some church obligations as a part of the guild’s rules. Once a year each guild celebrated their own special Mass, with special times for each guild. For example, the brewers’ Mass was celebrated on Monday after New Year’s while the tailors’ was on the Monday after Easter week.  Because of the guilds close association with the church, when the church was remodeled in 1671, the artist Johann Bellandt of Wessobrunn carved a number of statues of the apostles in honor of the guilds: Mathew for the butchers, Phillip for the bakers, John for the brewers, Bartholomew for the leather artisans, Jacob for the weavers, and Simon for the tailors.  I did not seem to find an apostle representing my ancestors’ trades though!

[Written for the 109th Edition of the Carnival of Genealogy: Places of Worship]

2 thoughts on “Praying With My Ancestors: The Stadtpfarrkirche”