On January 12, 2009, I wrote a post entitled Research Plan: Finding Death Dates for Joseph Bergmeister and Ursula Goetz, my great-great-grandparents. I knew their birth dates, but hadn’t yet found their death dates. I could go backwards several generations on Joseph’s side to include birth, marriage, and death dates, but I was still perplexed as to when he died. So, I developed a solid plan based on what I knew. Plans are great, but in order for them to work you actually have to put it into action. I didn’t. However, luck was on my side…without trying, I found the death date of Ursula!

I had some errors in my original post. I wrote:

Ursula Dallmeier was born in Aichach on 17 Mar 1847, the daughter of innkeeper Joseph Dallmeier from Aichach and Ursula née Eulinger.

The bold items were incorrect. The correct information is as follows:

Ursula Dallmeier was born in Prittlbach on 21 Sep 1846, the daughter of innkeeper Joseph Dallmeier  (or Dallmayr) of Asbach and Ursula née Eichinger.

Based on the dates of the births of her children, I made some assumptions on the death date of Ursula Dallmeier Bergmeister Goetz. Based on the fact that she was alive at the time of her son Joseph Bergmeister’s marriage and she was not by the time of her younger son Julius Goetz’s marriage, I assumed she died between 1897 and 1919. The place was assumed to be Regensburg.

As I said, I never actually put the research plan into action, but I continued to research the family by tracking down some cousins. When I found her son Julius’ grandson, he shared a treasure trove of documents and photos with me. Among the pile were some funeral cards…and suddenly, I knew when Ursula died – 21 January 1911.

I still don’t know when her husband, my ancestor Joseph Bergmeister, died, and I don’t know when she married her second husband, Herman Goetz. But I now think that both events happened in Regensburg based on some of the information my cousin gave me. But there was something even better than filling in that piece of information about Ursula’s life. Some of the photos were labeled, and some were actually of Ursula. This is one of Ursula, approximately from the late 1870’s, taken at the Photographie von Martin Kraus, Ostengasse H 163, Regensburg: 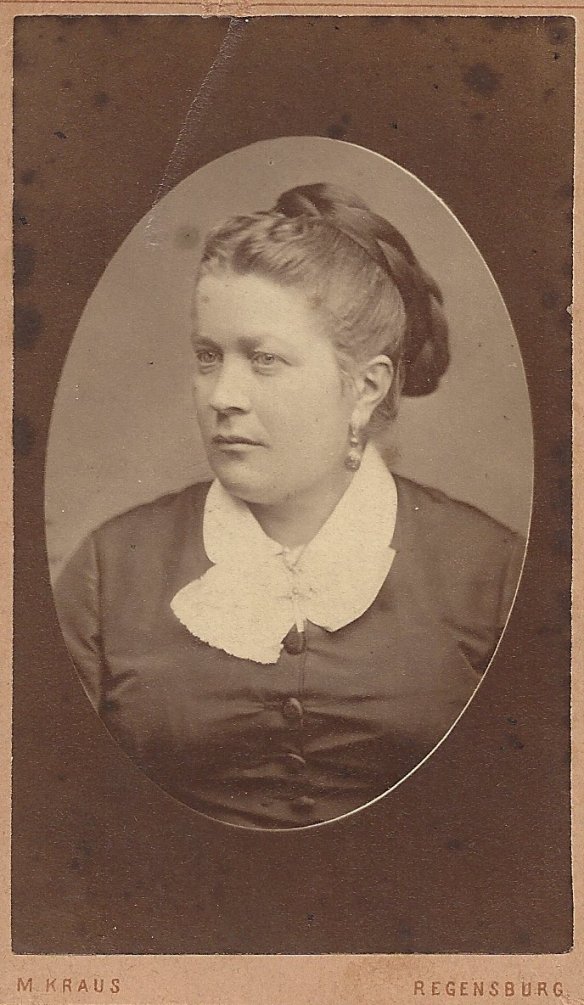