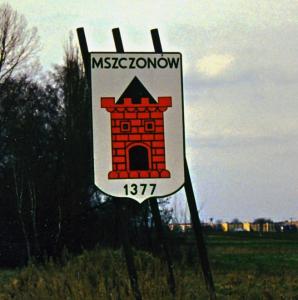 This edition of the Carnival of Central & Eastern European Genealogy highlights “The Village of my Ancestor”.  Several of my ancestors came from very small villages in Poland.  In fact, my great-grandmother Rozalia Kizeweter Piątkowski was born in Mała Wieś, which translates into English as “small village.”  Eighteen villages in Poland bear this name, so  hers is also called Mała Wieś Promna because it is located in Promna borough. The village was so small, that according to Słownik Geograficzny Królestwa Polskiego there were only 7 houses and 71 inhabitants in 1827 (that’s a lot of people per house!).

But, there’s not much to write about such a tiny village, so instead I’d like to introduce you to another village of another ancestor, Antonina Rozalia Pluta Pater, who was born on 11 June 1863 in Mszczonów.  The title of this post was my first introduction to the name of the town, which came from the birth record of Antonina.  The record begins, as all vital records did at that time, with the words “This happened in the town of  Mszczonów…” 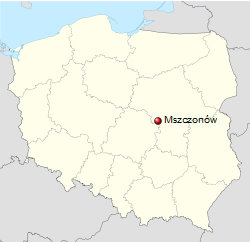 Mszczonów is located nearly in the center of Poland in  Żyrardów County and the Masovian Voivodeship.  As of 2004, the town had 6,310 inhabitants and could be described as a small city rather than a village.  Mszczonów has a very old history.  It was first mentioned in a document written in 1245 by Duke Konrad I, but it is believed that a settlement existed in the area from the mid-twelfth century.   A local church was established by 1324.  In 1377, Mszczonów was declared a city by Ziemowit III, Duke of Mazovia.

The area was heavily forested and was directly on a trade route that went north to south through Poland.  Initially this location attacted residents, but in the 16th century the entire town became the property of the Radziejowski family, owners of adjacent Radziejowice.  Under the family’s control, the town was not developed.  Other factors that stagnated development of the town were the wars with Sweden from 1655-1657 and the partitioning of Poland that began in 1795.  Because of the wars, the population was reduced and the lack of craftsmen reduced trade with neighboring towns.  The situation changed during the partition years of 1795-1918, when Mszczonów fell under Russian rule.  Slowly the town’s population grew, and by the early nineteenth century the town was one of the largest in Mazovia.

This is the time that my ancestors lived in Mszczonów.  My 2nd great-grandmother was Antonina Rozalia Pluta Pater, born on 11 June 1863.  Her father, Ludwik Pluta, was a 19-year-old shoemaker whose father and grandfather were also shoemakers from Mszczonów.  Antonina’s mother, Franziszka Wojciechowski, was also 19 and the daughter of another shoemaker from the town.  Both Antonina and her mother would eventually leave Mszczonów to immigrate to the United States.   The records for Mszczonów held by the LDS only go back to 1808, which is not far enough back to find the birth record for Ludwik and Franziska’s grandparents who were all born around 1795-1800.  The Polish National Archives may have older records (availability can be checked online, but the site is down for service as of this writing).

Here are some photos from my visit to Mszczonów in 2001: 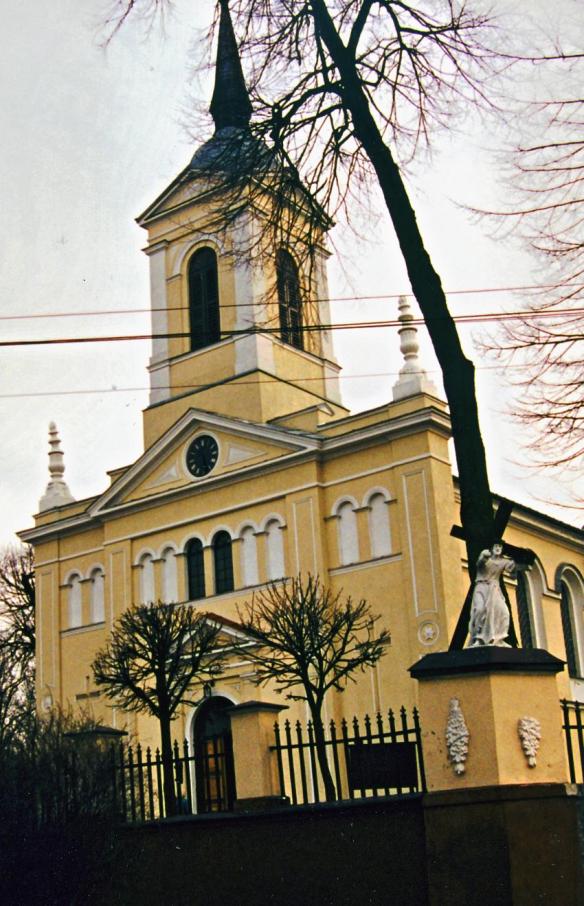 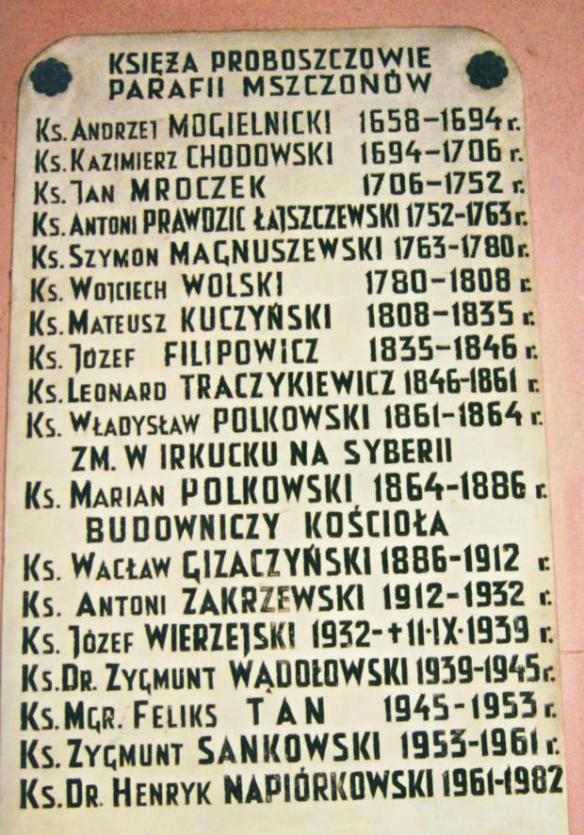 A plaque on the church listing the names of the pastors from 1658-1982. Rev. Filipowicz baptized Antonina's father in 1843.

[ Submitted for the 27th edition of the Carnival of Central & Eastern European Genealogy: The Village of My Ancestor ]

2 thoughts on ““This happened in the town of Mszczonów””