The theme for Week 16 of the 2015 edition of the “52 Ancestors in 52 Weeks” challenge is “Live Long” and my ancestor is my 3rd great-grandfater, Maciej Miller (Matěj Miller in Czech).

The prompt says it’s “time to feature a long-lived ancestor” but longevity, at least of the centenarian sort, does not seem to run in my family (at least not for my direct ancestors…the longest-lived relatives are each of my grandmother’s sisters – one lived to 92 and the other was 94).

I’m missing some death dates in my research thus far, but my longest-lived ancestor was already featured in Week 4, for Dionys Daniel also had the birthday closest to mine which was the theme that week. He was just over 89 years old when he died; however, I do not have an actual copy of his death record so let’s find my documented longest-lived ancestor…a tie between my paternal grandmother and Maciej Miller who both died at 84 years old. Maciej was technically older, though, for his age at death was about two months older than my grandmother’s.

Maciej Miller’s name in the 1849 birth record for his son, Jan Miller

Maciej Miller was born on 28 June 1824 in Zelów, Poland. The community in Zelów was founded by Czech exiles (see my ancestor featured in Week 8 for information about the founding of the town in 1802). Maciej’s father Pavel was not one of the founding fathers, but he came to Zelów within the first decade.

Maciej grew up in Zelów and married Marie Szara, a descendant of another town founder, on 08 October 1843. They remained in town to begin their family. But like his forefathers, Maciej was willing to move for better opportunities. In the 1860’s, several families from Zelów migrated east to the larger city of Żyrardów. The town of Żyrardów was only founded in 1831, but it was quickly growing. The town was built around the large textile factory. Since the Czech community in Zelów was known for weaving textiles, some families decided to move for the opportunity to find work that would earn a better wage.

Maciej would remain in Żyrardów for the rest of his life. He lived a rather long life for the time, dying at nearly 85 years old on 09 June 1909. His son, Jan, my 2nd great-grandfather, only outlived his father by a mere four years and died at the age of 63 in 1913.

The theme for Week 8 of the 2015 edition of the “52 Ancestors in 52 Weeks” challenge is “Good Deeds” and my ancestor is my 5th great-grandfather, Jan Poláček (Czech spelling – alternate in Polish is Polaćek or Polaczek). Jan’s name was on the document for the purchase of property in 1802. That deed turned out to be a very good deed, indeed, for generations of Czech exiles in Poland.

Jan was born in 1759 in Groß Friedrichstabor, Prussia (Tabor Wielki, Kępno, Poland today). He was the son of Prokop Poláček and Kateřina Tomešová. Prokop was born in Labská Stráň in Děčín district in the Ústí nad Labem region of the Czech Republic. It was right on the border of what was then Prussia, and Prokop was part of the wave of Protestant (Czech Brethren) immigrants from Bohemia that left because they were under persecution for their faith. By 1754 Prokop was married and starting a family in Groß Friedrichstabor (his wife is also a Czech immigrant, but her birthplace is not yet known).

The community of Czech immigrants to Prussia was not similar to the American immigrant “melting pot”. In America, immigrants tended to form communities with other immigrants from the same country. The American-born children of my Polish and German immigrant ancestors grew up surrounded by immigrant families and understood their parents’ native languages and cultures, but they or their children married outside of their ethnic group and thus became truly “American” within a generation or two. In the late 18th Century in Prussian Poland, the Czechs stayed together as a close-knit community – the immigrants’ children, grandchildren, and even great-grandchildren all maintained the Czech language and their religion.

The Czech exiles settled in several towns throughout the area. The larger towns were Husinec (Gęsinec), Groß Friedrichstabor (Tabor Wielki), and Friedrichsgrätz (Grodziec) and the smaller villages included Czermin, Sacken, Sophienthal, and Erdmannsdorf. (Read more about one of my other Czech exile ancestors, Václav Jirsak, from Week 2 of my “52 Ancestors” – his son and grandson were part of the new town with Jan Poláček.)

Some residents of these towns hoped for a larger area where they could all live together and have one pastor for their church. In November, 1802, some of the town leaders in Groß Friedrichstabor, including my ancestor Jan, learned that there was some land available for purchase that was close by – only a 5- day walk. They sent some men to look at the proposed land and it was found to be agreeable. On 20 November, an agreement was written up and signed by the leaders, and it was forwarded from town to town to get more people who were willing to move to the new settlement. In total, 54 men agreed to contribute to the purchase and become landowners, and an additional 65 agreed to make the move.

In November 1802 a contract was signed by the “Founding Fathers” to buy the town of Zelów for the community of Czech exiles.

The seller was the Polish landlord Józef Świdziński who owned a vast amount of land – his “subjects” living on that land were moved to another area. He sold the land to the Czech colonists for the sum of 25,666 Prussian thalers or 154,000 Polish złoty. The sale was final by 21 December 1802. The first settlers arrived in February 1803 and the first child was born in the new town, Zelów, on 23 March. Most colonists arrived in May and June of that year, and in June the final payment was made to Świdziński and elders of the town were chosen as leaders.

The property was divided among the 54 settlers, with some families sharing the financial burden with additional families. There were acres set aside – both forest and meadows – for community use, and more set aside for a church and cemetery.

The early work of clearing the land and building houses was difficult, and even some of the young men died. But, the community prospered and more colonists moved to the town. By 1813 there were 106 landowners in the town.

Jan died on 12 October 1812 at the age of 53 – almost ten years after signing the deed that created the community. 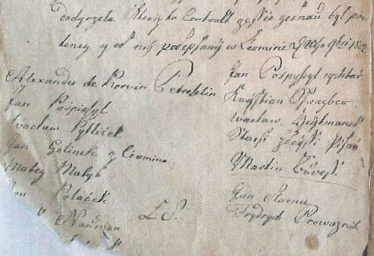 Jan’s name on the deed is on the lower left.

The best part about this week’s ancestor is that I didn’t know he existed until a few weeks ago. After my post for Week 2 of the challenge, a cousin-I-didn’t-know-yet left a comment. We compared notes, and as it turns out we’re simultaneously 4th, 6th, and 7th cousins from various lines of the Czech exiles to Poland. I had documentation on two of those lines, but our closest connection was my mysterious Miller line. Thanks to participating in 52 Ancestors, and thanks to my new cousin, I now go back several generations on that line after being “stuck” for so long. Jan Poláček is one of our ancestors from that line through his daughter Marie.